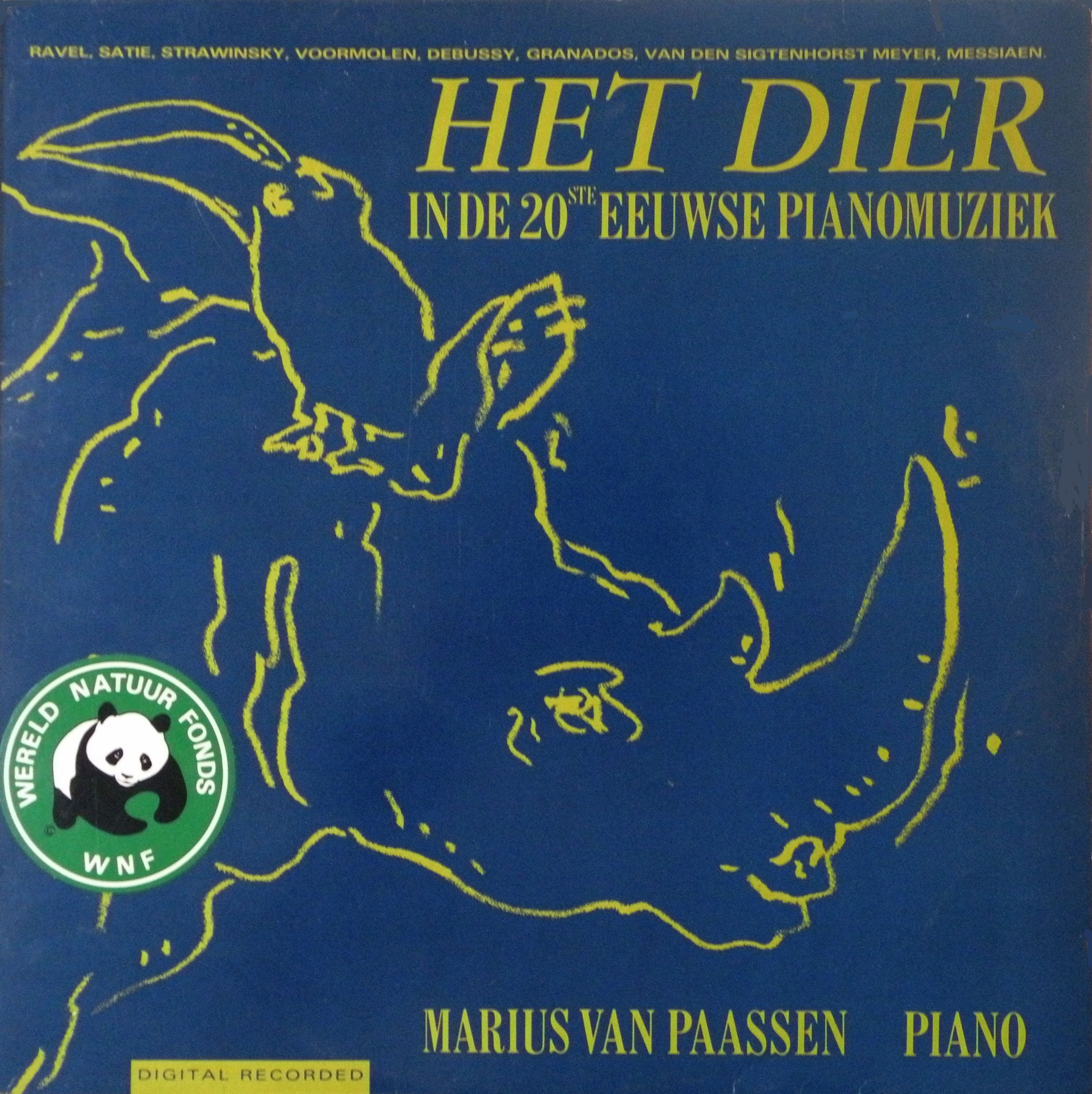 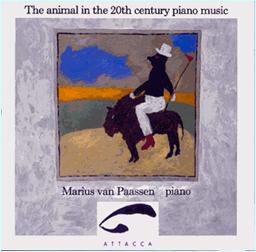 World Wildlife Fund used this record in a campaign for the Indonesian Rhino on Java.

At the beginning of the 20th century romanticism was coming to an end and many artists started looking for new impulses. Nature and extra-European culture turn out to be very inspiring. The animal plays a leading role in the magic, the art, the social relations, the dance and the music of non-European cultures. Like artists as Picasso and the group of painters known as 'Les Fauves', so composers also found inspiration in 'primitive' art.

Stravinsky writes wild dances with titles alluding to 'barbaric' rituals such as 'The worship of the earth' and 'The raising of the ancestors' in 'Le sacre du printemps'.The piano pieces on this CD all share the same topic: the animal. It's fascinating to hear how different composers work with this animal-theme.

Bare lonely signals and dark gloomy sounds slowly succeed each other. At times the movement accelerates, but in the end there is a complete standstill. Here too it is the refinement and the simplicity that are the cause of the fascinating quality so typical for Ravels music. He was extremely critical towards his work, but what publications he allowed are always of a breathtaking perfection.

Erik Satie - probably the only composer interested in the surrealistic movement - was  convinced of the musical talents of animals. He gave lectures about animals and music in which he ardently defended their musical ability. It makes most people laugh when Satie comes to speak of his 'respected colleagues 'the animals. His statements are somewhere in between melancholy and humour and so is his music. Satie always comments on his own music.The absurdity of pompous Latin terms like Corpulentus or Substantialis provides an ironic counterpoint to the severity of the reprimand lightens the sadness of 'At home alone' and underlines the playfulness of 'Playing'.

This piece was dedicated to a young elephant. The first to dance it were elephants of the Ringling Brothers who were working for Barnum and Bailey's Circus. No less a person than George Balanchine made the choreography for these dancers. Although the themes are a little strange, it is a true polka... Towards the end the orchestra of the circus seems to get a bit confused: in blaring chords Schuberts march in D major roars through thepolka. Then a few firm chords end the piece as circus music should end.

This composer probably had older elephants in mind then Strawinsky: the jumbo sound of the piece can hardly suggest anything else then the fully-grown animal! Alexander Voormolen studied at the conservatory of his birthplace Rotterdam and completed his education as a composer in Paris. One of his teachers there was Ravel. Especially in the handling of colouristic effect Voormolens music is rich in expression. In this mysterious  music it is not hard to recognise the heavy trod of the big animal.

The water ripples through a little stream. Suddenly a golden fish shoots past and leads us in adventure. Now it disappears again in the water, then it seems to be on the run. The way in which Debussy portrays this abrupt style of movement is masterly. It's not without reason this piece forms the apotheosis of the cycle 'Images'.

In 1916 a torpedo sinks an ocean steamer on the way from New York to Spain. Amongst the victims is Enrique Granados. In New York he attended the first performance of the arrangement of his piano cycle 'Goyescas'. the work is inspired by the love-scenes painted by Goya, an artist whom Granados admired. The complaint or 'The maiden and the nightingale' is full of a melancholic lovesickness. The melody drags along amidst a soundweb spun in a Baroque-like fashion that reminds one of the complicated ornaments the Spanish Architect Gaudi incorporated in his designs. Towards the end of the piece in a sad silence, a nightingale sings. Can he offer comfort? No, the girl again states her complaint - be it a in a resigned C sharp major.

One of the countries Bernard van den Sigtenhorst Meyer visited during his travels after his studies at the Amsterdam conservatory was Indonesia. This might be an explanation for the exotic influences which can be heard in his music. He even composed a cantate on the live of Buddha. The 'Eight Preludes' are  composed as a whole Each one of them portrays another animal and there are strong contrasts between the individual pieces: wild horses interrupt the pondering cat, but the philosophic marabou is not so easily disturbed by the horses! Sigtenhorst Meyer succeeds admirably in representing each different animal by using special rhythms and colours. He states explicatory that the music is not to be used to accompany film- or theatre performances. And indeed the eloquence of these preludes is enough in itself, there is no need to visual support. The titles of the preludes are: The camel, the lion, the cat, wild horses, marabou, humming-bird, the mouse and dear.

Olivier Messiaen is not only a composer but also a true ornithologist who travelled widely to study birds and their singing in their natural surroundings. One of the musical results this led to is ' Le Catalogue des Oiseaux' (1961) for piano solo. The Traquet Stapazin is one of the birds featured in this great work, long enough to fill an entire concert program. The creature lives in the Pyrenees near the coast of the Mediterranean Sea. Messiaen provided extensive program notes to the music that tells the story of a day in the life of this bird. The vineyards form a sort of gigantic stairway descending in terraces to the seashore(soft chords moving downwards). Suddenly there is the call of the Traquet Stapazin in its specific rattling tempo. Silence. Then another bird answers in his own tempo. . More birds join in. Silences and bird-signals. Heavy chords increase in strength, the sun ascends to its highest point. It is noon. the birds keep on singing. the sun sets. In the twilight the mountains and the sea turn red. Tender sounds. A last few birds sing until everything gets dark and what remains is just a memory.